What next for Ukraine… and Russia?

In the immediate aftermath of the Soviet Union’s collapse, the signs of communism’s failure were inescapable. Along with admission of ideological defeat – made all the more painful given the importance of face and pride to the Russian psyche – came financial meltdown and a sharp downgrading of Russia from global superpower to diminished, weak, failing state.

But there remained hope that Russia was a nation firmly on the path to multi-party democracy, rule by law, and press freedom. It was a hope stoked in 2000 by the election of Russia’s second President, Vladimir Putin. In contrast to his predecessor Boris Yeltsin, Putin was keen visibly to demonstrate Russia’s willingness to become an important ally to America in areas of mutual interest. He accepted a second stage of NATO enlargement to the Baltic States, allowed the US to withdraw from the anti-ballistic missile treaty and stood shoulder to shoulder with George W Bush in the battle to defeat global terrorism. Conveniently, this also provided him with an alibi for his nation’s brutal suppression of dissidents in Chechnya.

As Ukrainian cities, either side of the strategically critical Dnieper River, are targeted by Russian fighter jets and artillery, the cautious optimism of those years now seems hopelessly misplaced

Yet it was the West’s failure to respond robustly and push back against Russia’s annexation of Crimea in 2014 that led Putin to believe that there would be little Western appetite for a fight over Ukraine. Despite the admirably united NATO front in the early days following the current invasion, Putin’s scepticism may yet be vindicated. The cost in terms of restricted oil/gas supplies, economic disruption and a renewed refugee crisis on a scale not seen in Europe for over seven decades has the clear capacity to divide the West, especially if this conflict is prolonged.

Meanwhile, China will be watching events closely. Expect it wilfully to undermine the impact of unprecedentedly stringent sanctions imposed by the West. Whether as a middleman in the global trading supply chain or by mopping up excess and unwanted supplies of Russian oil, gas and coal in the international markets and providing staple foodstuffs in return. Equally, it will observe the resolve, or otherwise, of the US and its allies as it contemplates its own next moves in Taiwan, Hong Kong and in South East Asia. The risk now is that with authoritarianism on the rise, if Putin is not rebuffed, then fellow autocrats will feel emboldened to act.

In practical terms, Putin has long feared encirclement by nations which since the end of the Cold War are no longer within the Russian orbit. In taking a firm stance over Ukraine, which at one time was assured that it would be absorbed into Europe’s economic and defence ambit, he set down a marker that his nation would not tolerate further encroachment into what he has long regarded as the Russian sphere of influence.

What we in the West have long failed to understand is that most Russians see the Gorbachev and Yeltsin eras as ones of chaos, uncertainty and utter humiliation. Despite economic troubles, Putin has been able consistently to maintain a semblance of domestic popularity by telling the Russian story, filling the vast ideological vacuum left by the disintegration of the communist ideals with the notion of a Russian civilization based upon patriotism, selflessness, and deference to a powerful state. He presents himself to a rapt global audience as the champion for the interests of the Russian diaspora throughout the region.

In doing so, he has tapped into a pool of resentment that extends well beyond Russia’s borders to encapsulate many of those who despise the US hegemony of recent decades. Putin is surrounded by an elite keen to preserve their powerful business interests, dazzling wealth and access to the luxury goods, lifestyle, properties, and educational excellence offered by the West. The prospect of being placed on an international blacklist by the US and Europe, with assets frozen and visas cancelled, is a sobering one for Putin’s cronies and apologists. Lest we forget many of the companies owned and run by these elites have already had to make significant cash calls because of the collapse in value of the Russian currency, shares and assets.

If the West is not to engage militarily in the Ukraine, it must at least continue to show the Russian President that it remains resolute when it comes to the implementation of sanctions. Even if this course of action seriously harms our own short term financial interests (and I observe this as the erstwhile MP for a central London seat, which has been the beneficiary of Russian wealth in recent years).  It may prove inconvenient, unpredictable and painful closer to home, but Russia needs to know that the benefits of the West’s outward looking, free trade and liberal economic institutions must not extend to its companies and countrymen if it continues to test our resolve.

In the longer term, it is also vital that Europe reduces its reliance on and exposure to Russian oil and gas. We knew this full well eight years ago at the time Crimea was annexed and have done precisely nothing to mitigate the situation in the meantime. The United States must urgently assist in this regard, removing all barriers to exporting its own energy resource to the region and encouraging Europe to achieve energy independence by sharing new technologies such as those around shale gas.

The appalling scenes of human suffering of ordinary Ukrainian men, women and children currently being broadcast relentlessly across international TV and social media are nothing short of heart-breaking. I feel this deeply as my own late German mother was a refugee at the age of five in 1945, as her family was amongst millions ethnically cleansed from what was to become modern day Poland. Ironically, the town her forefathers had lived in for generations was subsequently inhabited by ethnic Poles, who had themselves been displaced from Lwow, now known as Lviv, today the most prominent city in western Ukraine. The borders in these parts have never been quite as fixed as many partisan politicians would have us believe.

However despite the relentless, emotionally draining footage of carnage, now is the time for cool, strategic analysis. Evidently, if NATO were to resort to hard military power and ramp up the conflict with Russian forces already in Ukraine, the escalation in loss of life and destruction would be appalling. Our collective recent record of such interventions, from Iraq to Afghanistan, has also been little short of disastrous. 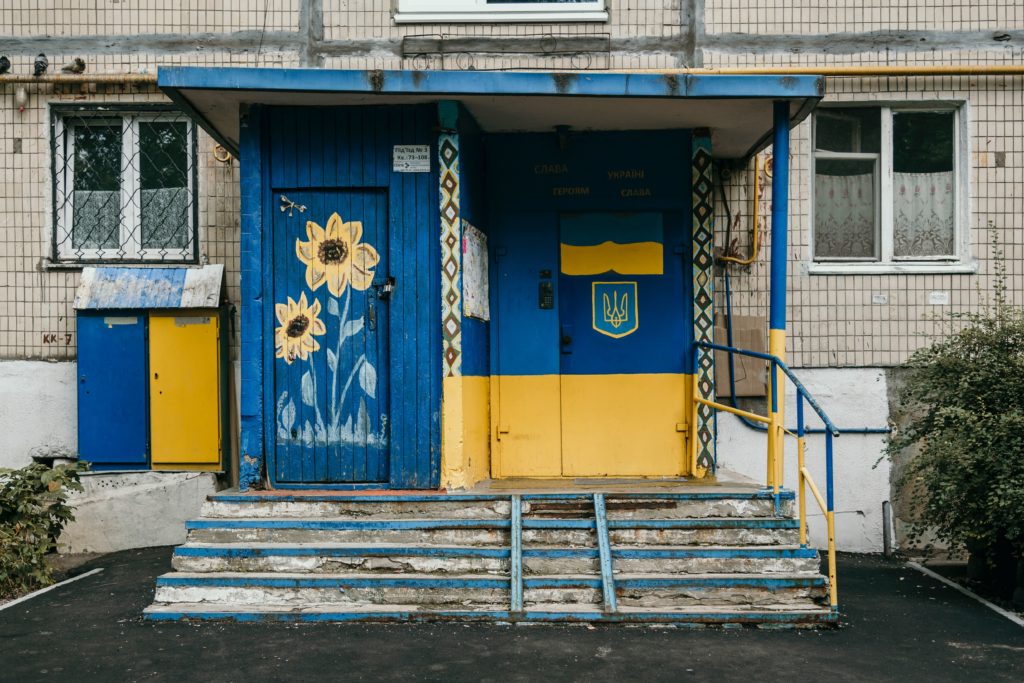 NATO should also recognise that its eager attempts over the past three decades to draw Ukraine away from Russia’s orbit have on balance been both misguided and unwise. In the euphoria following the collapse of Communism and Cold War triumph such initiatives were understandable. They were also mistaken. At this time of unimaginable grief such a message is unwelcome and in no way reflects what the hapless and long-suffering citizens of Ukraine deserve. Modern day Russia is an authoritarian, kleptocratic aggressor and a near constant threat to its neighbours and to global stability. Nevertheless Ukraine’s fledgling – and let’s be frank – flawed democracy should never have been allowed to believe it would imminently be ready to join the West. For a nation of 44 million, it is insufficiently advanced economically, too divided internally and, to put it bluntly, simply in the wrong place geographically.

One of the many ironies in the UK reporting of recent events is that our left/liberal press and media, normally so relentlessly critical of the governments in Poland and Hungary have been strangely muted when it has come to analysing the similarly traditionalist Ukraine administration’s own track record. It is also worth reflecting how Poland and Hungary in particular have immediately risen to the challenge of providing both solidarity against Russia’s aggression and also leading the way to provide pragmatic humanitarian aid and support as the ceaseless flow of displaced refugees crosses their borders.

Make no mistake, Vladimir Putin has spent much of the past eight years preparing for this military re-engagement in Ukraine. He has known from the outset that Ukraine was a conflict western leaders wished would simply go away. Even the unprecedentedly extensive economic sanctions imposed upon his regime will, in significant part, have been subject to a long planned programme of mitigation.

If our collective resolve weakens at the prospect of an endless humanitarian catastrophe, the likeliest outcome in the months ahead is a negotiated settlement. After the eternal security assurances set out in the Budapest Memorandum of 1994 and adamant proposals to recognise the autonomy of designated sub-regions as part of the ill-fated Minsk Accords in 2015, we should not be surprised if Ukrainians doubt the reliability even of a UN brokered deal to bring an end to hostilities.

Predicting the endgame is naturally highly speculative at this point, but partition along the historical dividing line of the Dnieper between Russian and central European spheres of influence may in the months ahead provide the relief of a ceasefire. Despite all the rhetoric on both sides, if matters become deadlocked in an endless attrition within Ukraine’s towns and cities this may be the only way to avoid ever more human carnage and misery.  However, as we all know from Israel/Palestine to Cyprus, and from Bosnia to Northern Ireland, such expedient and apparently temporary arrangements have a distinct tendency to turn into permanent sources of tension.

Written on 3 March 2022 by The Rt Hon Mark Field, former Member of Parliament (MP) for Cities of London and Westminster and Consultant at Buchler Phillips, the UK’s leading independent corporate recovery, restructuring and turnaround firm.

All three photos are the Capital of Ukraine, Kyiv.